The above picture is our collie Alice being visited in her bed by Felix! We currently have four pets: Alice our collie girl, and three  cats (all brothers) Felix and Hugo plus Charlie. I love them all to bits, and husband is enamoured with them too! Before going any further someone else must be featured in this post namely our very first cat, Sam who lived happily with us until he was nineteen years old ….

Sammy was an only cat and my first ‘real’ pet.  As a child I had part share in a budgie that was really my sister’s, plus got to play with the various small classroom mice who accompanied her home when she was doing teacher training. My Mum used to complain they woke her up by making their beds at night as the cage was in our hallway. Sammy arrived almost by accident when we were visiting friends. As we parked at their house, a most handsome pale ginger cat arrived and jumped up onto the bonnet of our car and miaowed at us. I said to my husband he was just the sort of friendly cat I’d like. We mentioned we were looking for a cat, and it happened that Sammy had been rather challenging that day going into a neighbours and stealing food, plus he was jealous of our friends’ old cat and would push him off their laps! I think our friend J. was so exasperated she impulsively said: ” here you are!” and handed me Sam, following this up with the loan of a cat basket to take him home in plus food recommendations. He stayed with us for another eighteen years. I do suspect J. regretted this hasty decision but I certainly never did!

Sam was a delightful affectionate cat, he was also a fighter and loathed all other animals! We regularly had to referee ‘scraps’ with unfortunate feline visitors to the garden, and take him to the vets to treat bites and torn ears. He was even known to have a go at dogs. When he reached the grand old age of seventeen, we got Alice! Very brave of us really as Sammy initially disliked her intensely and would take a swipe at her with a paw whenever she came near him. This mellowed into tolerance eventually, but he never showed her the kinship and affection that our three brothers do. Despite all this Alice was very gentle and kind to Sam as the following picture shows as he lies asleep in his bed, not having much longer to live and she lays a protective paw there.

Alice was very nearly not our dog, she had been returned to the Rescue Centre for barking (the lady had had her for one night!!) I saw her on the Centre’s website and we went down to see her, they were very keen to rehome her with an experienced dog owner and as we were first timers they tried to steer us towards less feisty dogs. She was advertised as needing ‘loving but resolute handling !! ‘ … took her for a walk in the paddock at the Centre and just fell in love with her, particularly when she gave me a huge lick right across my face (and I had never allowed dogs to do that to me!) We reluctantly agreed with the staff member to come back later when there were more dogs in, but at home I knew Alice was the one I wanted, so phoned them back and found they were responsive to our determination and the rest is history! She’s a spirited dog very clever, food obsessed, has a great sense of humour, loves everyone and is very good with elderly people and children. She is also a beloved companion.

Now for our three boys, they came from the same Rescue after Sammy was PTS in 2012. We visited several cats & kittens in their enclosures and they all differed in age and temperament, but as soon as we walked into the cage with this litter of kittens (there were originally five, two booked by another family) we knew they were ours. I still laugh at the memory of my husband with kittens clinging to every surface: legs, back, shoulders! as they made themselves acquainted like limpets on a rock. 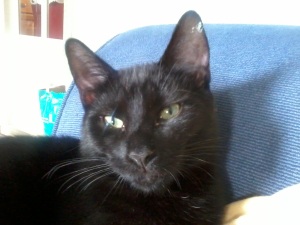 All three brothers are great pets, they will all sit on laps  and allow you to pick them up and rub furry tummys. They also play fight causing great hilarity for onlookers and are adept at catching various rodents (not so popular .. ) They like Alice and greet her nose to nose and rub round her/walk underneath her. She is very good with them, (will give the odd chase!) but knows they are her cats. 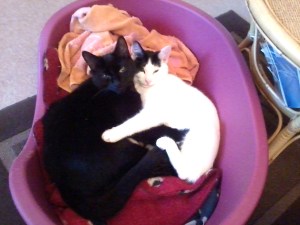 Hugo and Felix are the most polite and well mannered cats you could hope to meet, while Charlie is the naughtiest. H. is the most ‘senior’ in the brotherhood, and the others defer to him usually, then F. who is the largest due to his eating habits, then C. is the smallest. Life can never be dull with them around.

Books I am reading

Fascinated by the Nazarene but unimpressed by religion!

In the mess, struggles and joys of life, Jesus is with me.

In a society where most people have kids, some of us don't because our partners are unable or unwilling to make babies. That's what this blog and my book, Childless by Marriage, are about. Let's talk about what it's really like.

stories about childlessness, faith and the space in-between

A Monk on the Mission

Doggedly In Rome, by Murphy

on the net, nobody knows you're a dog